TRS has seven oral vowels [i e ə a o ɯ u] as illustrated in Figure 3 below. Conventional orthographic symbols are included in parentheses. Of the vowels listed here, the mid central vowel /ə/ rarely occurs and was found in only four tokens we have documented thus far, the interjection ë [əː43] ‘what?’, ë’ëj yiô’ [əʔə32h ʒioʔ4] ‘hiccough’, hiëj [jə3h] ‘stone’ and finally, gudurë’ [ɡu–durə3ʔ] ‘PST–destroy’ that appears in the text below. Younger Triqui-Spanish bilingual speakers in San Andrés Chicahuaxtla tend to merge /ə/ with /e/ and /ɯ/ with /i/ which may point to a future loss of both /ə/ and /ɯ/. In Santo Domingo del Estado, a town adjacent to San Andrés Chicahuaxtla, both /ə/ and /ɯ/ have already merged with /e/ and /i/, respectively. 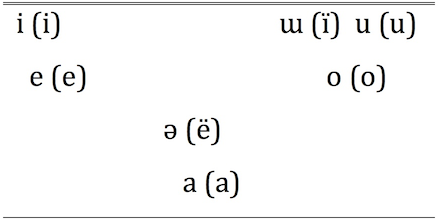 Each vowel represents a separate syllable in the Triqui languages. There are no diphthongs or triphthongs in TRS except for Spanish loanwords such as [ɡwa̯ijuː3] ‘horse’ from the Spanish caballo, [sku̯e3laː2] ‘school’ from the Spanish escuela and [radi̯uː3] ‘radio’ from the Spanish radio that some speakers may pronounce with diphthongs or triphthongs as in Spanish. Final syllables may end in a modal, aspirated, or glottalized vowel (e.g., /Vː/, /Vh/, /Vʔ/ and /Vʔ/hV/) and are phonemically contrastive. Final vowels are lengthened in words ending in a [Vː]-stem rime but are shorter in duration before word-final coda consonants /ʔ/ or /h/. There is a word-final constraint in TRS that vowels in word-final contexts must be lengthened. Word-final long vowels are phonetic and do not contrast with short vowels. (For additional information on vowels in TRS, see Elliott et al. 2016.)