TRS has five tones and a rich variety of tone contours. In this article, tones are marked from 1 to 5, where 1 is the lowest tone and 5 the highest. Contrastive tone is generally found in the final syllable with some exceptions that are listed below. In TRS, the default or unmarked tone is /3/ which is usually not indicated in nonfinal syllables unless it is found to be phonemically contrastive in minimal pair comparisons, for example, [ʒi4luː3] ‘knife’; [ʒi3luː3] ‘cat’; [ʒi3luː53] ‘worm’.

Table 4 gives examples of TRS tones and tone contours in words with three different word final rimes: [Vː], [Vh] and [Vʔ]. In TRS, tone and rime are different, although they interact. At the phonological level, the inventory of possible tones is constrained by whether and where the tone-bearing syllable involves laryngeals, for example, syllables ending in a glottal stop /ʔ/ or /h/ show fewer tonal possibilities than those that end in a vowel. Based on the examples listed below, TRS has a total of 15 tone contrasts with a possibility of 25 different word-final tone and rime combinations. The text contains all but nine of the examples listed below. Those that do not appear in the text are marked with an asterisk. 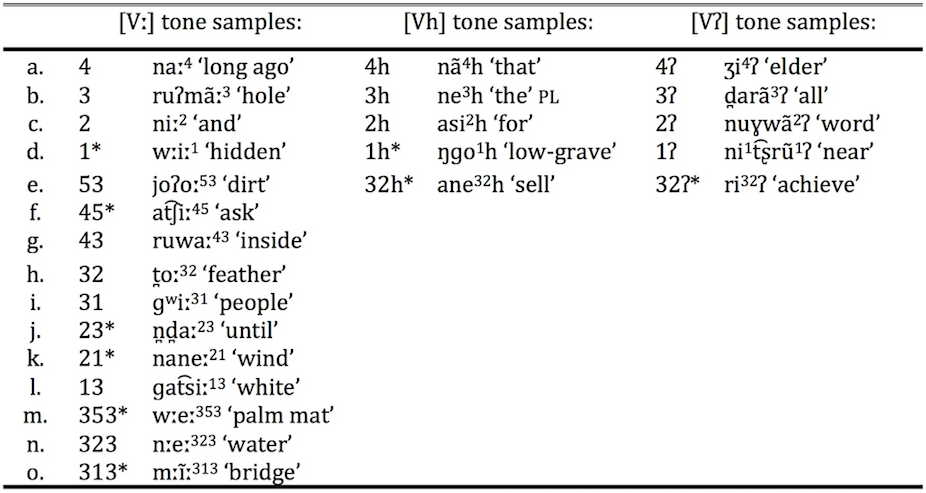