[Texts in the Indigenous Languages of the Americas, number 1]1
edited by Lynda Boudreault

This collection gathers together texts from seven languages of the Zoquean branch of the Mixe-Zoquean family, shown in figure 1 (Kaufman and Justeson 2004, Wichmann 1995:10, Zavala 2012). The Zoquean branch includes the dialects of Chiapas Zoque, the two subgroups, Gulf Zoquean and Chimalapa Zoque of Oaxaca, and the recently discovered Jitotoltec. The Gulf Zoquean group includes the languages Ayapanec,2 Sierra Popoluca, and Texistepec, which are spoken in the northern part of the Gulf Coast regions of southern Veracruz and Tabasco. The languages belonging to the Chiapas dialect chain (Wonderly 1949) are spoken in southern Tabasco and central and northern Chiapas. Santa María Chimalapa and San Miguel Chimalapa Zoques are spoken in Oaxaca. The online version of this collection also includes a text from Jitotoltec, which did not appear in the print version. 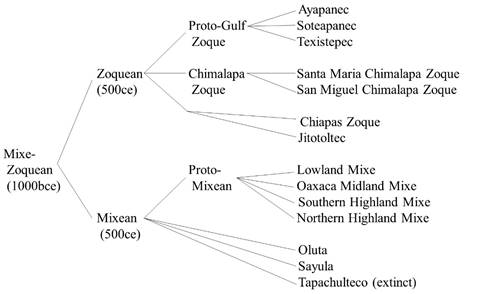 The languages of the Zoquean branch of the Mixe-Zoquean language family (figure 2) are spoken in communities throughout the Isthmus of Tehuantepec in the states of Veracruz, Tabasco, Chiapas and Oaxaca, bordered by the Gulf of Mexico to the north, the Pacific Ocean to the south, and the Yucatan Peninsula and Guatemala to the east. 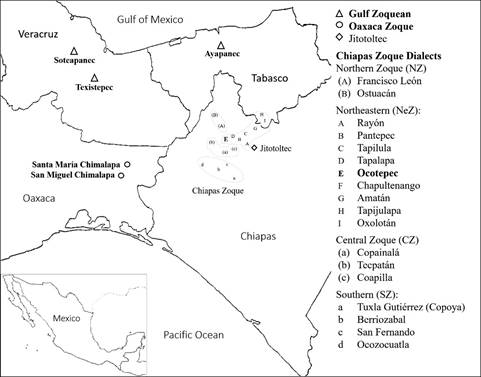 The region in which the Zoquean languages are spoken boasts coastal plains, tropical rain forests, savannahs, broad river valleys, and volcanic mountains. This environmental diversity is the setting for the evolution of the Mixe-Zoquean language family, which dates back to the Olmec culture, whose language is believed to be the “most ancient attested member” of the language family (Campbell and Kaufman 1976; Justeson and Kaufman 1993, 1997; and Kaufman and Justeson 2004). Historically, the inhabitants of the Isthmus region were bordered by Nahuatl (Uto-Aztecan) speaking populations to the west, Ch’olan (Mayan) populations to the east and southeast, and Zapotec to the south. The populations of all the language groups spoken throughout the region have declined due to displacement and migration.

The languages of the Gulf Zoquean subgroup—Ayapanec, Sierra Popoluca, and Texistepec—were once spoken in villages and towns extending across the plains, mountains, valleys, and forests that painted the landscape along the Gulf Coast on the northern part of the Isthmus of Tehuantepec.

Sierra Popoluca, also known as Highland Popoluca or Soteapanec, is spoken in villages and towns throughout the mountains in three municipalities, the largest of which is Soteapan. The easternmost Zoquean language, Sierra Popoluca, is in contact with Nahuatl (Uto-Aztecan). Texistepec is spoken in the town of Texistepec located in the southernmost part of the state of Veracruz, Mexico. In 1990 there were a reported 427 speakers; more recent estimates indicate there are some 100 (Wichmann 2002; Reilly 2002). Census data is inconclusive. Ayapanec, spoken in Tabasco, has four speakers and some 20 semi-speakers or “rememberers” (D. Suslak p.c.). As of 1971, the language was no longer being learned by children (Garcia de León 1971). There are two unrelated languages spoken in the vicinity of Ayapa—Chontal Maya and Nahuatl. Ayapanec grammar and lexicon is deeply influenced by Chontal.

Chiapas Zoque includes some 18 dialects making up a dialect chain throughout Chiapas and Tabasco (Wonderly 1949). Ocotepec Zoque, included in this volume, is a variant of Chiapas Zoque. Ocotepec—named for the community in which it is spoken—is one of the nine northeastern dialects of Chiapas Zoque. Of all the Zoquean languages, Ocotepec and Tecpatan are the only members of the branch for which we have any linguistic information prior to the late 19th Century, and there are only data from Colonial sources on the Chiapas dialects.

The Chiapas dialects are historically in close contact with Ch’olan languages (Mayan), as shown by the extensive borrowing of syntactic structures between the families. The noun class markers, word order, auxiliaries, and directional morphemes observed in Chiapas Zoquean have all been borrowed from Ch’olan (Zavala 2002, 2014: Vásquez 2011). Evidence of exchange in both directions indicates a long tradition of intermarriage between the different language communities.

There are two dialects of Chimalapa Zoque spoken in two municipalities. San Miguel Chimalapa Zoque is spoken in San Miguel Chimalapa, in the southern part of the state of Oaxaca, in the southern part of The Isthmus of Tehuantepec. It is bordered to the north by the municipality of Santa María Chimalapa (Jimenez 2014:11). The language is not being transmitted to new generations. Those of the younger generations are passive speakers who understand the language, but cannot speak it. Other languages spoken in the region include Zapotec, Huave, Oaxaca Chontal, Lowland Mixe, and Santa María Chimalapa Zoque

Jitotoltec is spoken in northeastern Chiapas. Originally thought to be one of the Chiapas Zoque dialects, Jitotoltec has recently been identified as its own language (Zavala 2011). Differences in its phonology, morphology, lexicon, and grammar are observed that distinguish Jitotoltec from Chiapas Zoque. Jitotoltec has some 3000 speakers, and is in contact with Tsotsil speakers in the region.

The collection begins with two short Ayapanec texts. In the first story Uudzu Tsu’ Mbüünyi ‘Monkey and Thunder’, Monkey challenges Thunder to see who is loudest. Thunder appears in the form of a man who works in his field and requires a sword to perform his meteorological duties. The second story Yomi ndxe’ gwo’nh ‘Fish Woman’ tells of a woman who controls the environment and tells the protagonists that if they want to fish successfully they must trade their children. Their unwillingness to do so renders their efforts to fish fruitless.

The Soteapanec story JeɁm tzuɁukiny ‘The Caterpillar’ is one that belongs to a set of stories told to daughters in order to teach proper behavior. Such stories are told in other Zoquean languages (R. Zavala, p.c.). In this tale a caterpillar, who transforms himself into a man, seduces a flirtatious young woman going about her daily chores. Their relations lead to unnatural horrors that require the intervention of the town priest.

The Texistepec tale Kañcheñyooma ‘The Lazy Woman’—the longest in our collection—can be described as a hero tale that presents human lives in real context. Although the tale does not tell of magic and transformation, it does tell of a metaphorical journey in which the protagonist is able to transform his lazy wife into a productive and obedient housewife. The length of the tale is representative of the narratives found throughout the Zoquean languages.

There are two Ocotepec stories. The first story Näwayomo’ ‘The River Woman’—reported as having happened to the narrator’s grandfather—tells of a creature that is part snake and part woman who seduces unsuspecting men by transforming herself to look like their wives, causing the men to become ill and eventually die. In this account, the grandfather was able to successfully resist the creature’s seduction.

The second Ocotepec text Te’ kak yajkti te’ tsi’ ‘The Jaguar and The Opossum’ exemplifies the popular notion of a trickster who uses cunning to triumph over a menacing adversary and to emerge as a hero. In this story, a wily opossum overcomes the exploits of a hungry jaguar, leading the audience to the conclusion that intelligence can overcome strength.

The San Miguel Chimalapa narrative Bi maʔixi ‘The Dream’ differs from the others in that it is reported to be an actual dream; however, it is similar to the others in structure and theme. It represents typical characteristics of the hero narrative: it tells of a Dantesque journey guided by the devil.

The Santa María Chimalapa text Kaʔ sampaloʔke ‘The Imp’ is another example of a trickster tale. Here a duplicitous skin-changer appears in the form of a woman’s baby to deceive villagers for its own nefarious purposes.

Finally, the online collection includes the Jitotoltec text The Merchant. The story tells of a merchant who in his travels discovers corn masa imbued with characteristics of a living being, his nahual or ‘animal spirit’. He brings the pozol back to his wife and they drink it in atole. The man, having taken advantage of this gift, goes on to become a successful farmer and land owner.

The texts in the collection illustrate the cultural blending of elements from indigenous, Spanish, mestizo, and Christian cultures—a fundamental characteristic of Mexican folk art. For example, as noted by Jimenez and Zavala (this volume), the trickster in the San Miguel Chimalapa narrative conflates the duende of traditional lore with the devil of Christian mestizo influence. Characteristic of indigenous folk literature, many of the supernatural creatures are drawn from elements of the natural world. We see this in the serpent woman who seduces men in the Ocotepec story Näwayomo’ ‘The River Woman’, the fish woman in the Ayapanec text Yomi ndxe’ gwo’nh who controls sea life, and Thunder from the Ayapanec Uudzu Tsu’ Mbüünyi ‘Monkey and Thunder’. We also see the authoritarian influence of the Catholic Church when the priests are summoned in both the Sierra Popoluca text JeɁm tzuɁukiny ‘The Caterpillar’ and the Santa María Chimalapa text Kaʔ sampaloʔke ‘The Imp’, casting the Church as an authority in matters of the supernatural. Each of these elements play out against a backdrop of common day-to-day cultural experiences: fetching water, washing clothes in the river, working in the fields, fishing for food, flirting with mysterious strangers, judging daughter-in-laws as inadequate, etc.

Representative of a broader indigenous Mexican folk literature, the texts gathered here illustrate features typical of indigenous folk literature and the ways that diverse cultural elements are blended, reflecting the beliefs, experiences, fears, and humor of the storytellers and their Zoquean cultures. This collection brings together for the first time indigenous folk narratives from the languages of the Zoquean branch of the Mixe-Zoquean family.

The texts in this collection are presented in four-line interlinear format. The first line is given in the practical orthography established, in most cases, by the communities in which the languages are spoken. In other cases, such as that of Sierra Popoluca, the orthography was established by the Project for the Documentation for Languages of Mesoamerica and corresponds with the existing corpus of research on that language.

The second and third lines provide the morpheme-by-morpheme breakdown showing morphology, morphophonology, syntax, semantics, pragmatics, and in some respects historical information. It is in these two lines where the standardization across the languages is prominent. Line two is provided in Americanist notation in order to unify the collection and to make each text more readily accessible to the reader. Table 1 shows the orthographic conventions used for each of the languages where they differ from the Americanist characters. (ISO codes for the languages that have them are shown in parentheses.) 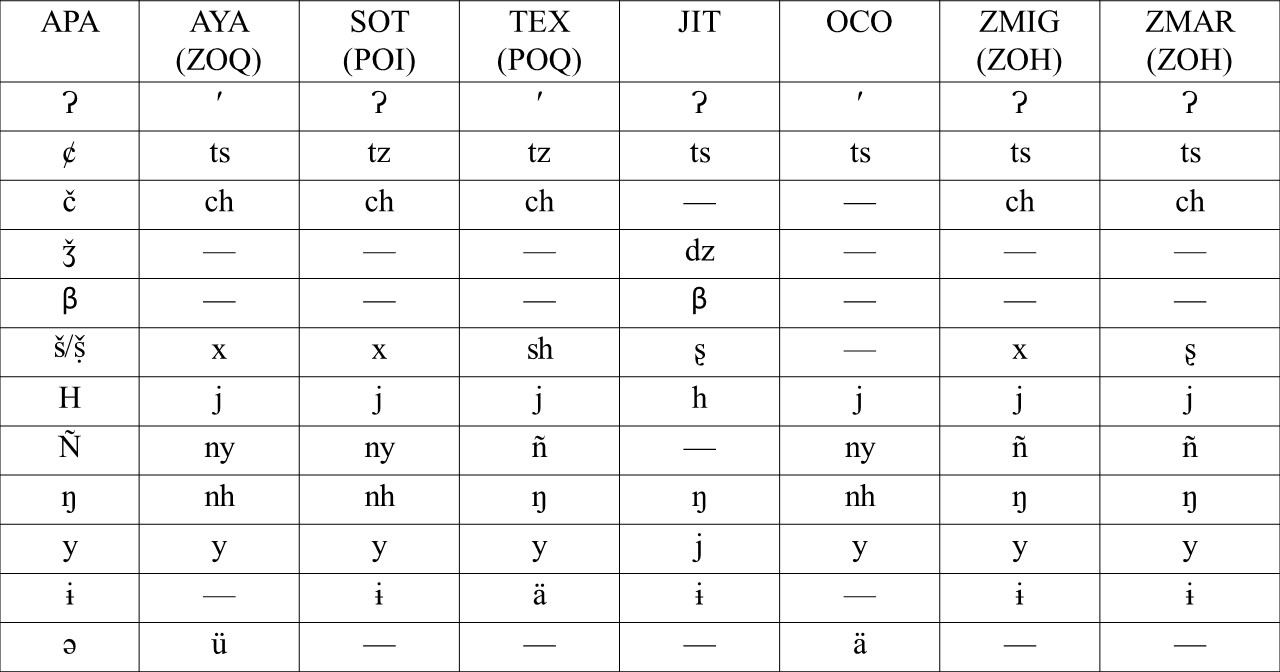 In line three, the abbreviations throughout the texts have been largely standardized. The symbols used in the interlinearlization are as follows:

There are six vowels in the inventories of the Zoquean languages. The front high /i/, the back high /u/, the mid-front /e/, the mid-back /o/, the low /a/, and a mid-to-high central vowel. This last vowel is more accurately described as being produced between the high-central and mid-central space. Zoquean researchers have independently chosen to represent the vowel either with /ɨ/ or /ǝ/. However, it is likely to be the same across the languages. table 1 shows both vowels, /ɨ/ and /ǝ/, but these two symbols are used to represent what is essentially the same vowel sound across the Zoquean languages.